A few weeks ago I went to Berlin for a weekend to celebrate one of my best friend’s hen do. Needless to say, it was the experience of a lifetime, not only because of the shenanigans we got up to but also because it is true what they say about Berlin. If you want a party, then Berlin is the place to be.

As a regular fetish goer, I couldn’t possibly go to Berlin and not visit the world famous KitKat club. Opened in 1994 by Austrian pornographic film maker Simon Thaur and his life partner Kirsten Krüger, KitKat is the place where anything goes, as long as there is consent. I have heard so much about this place, that I couldn’t contain my anticipation at all. 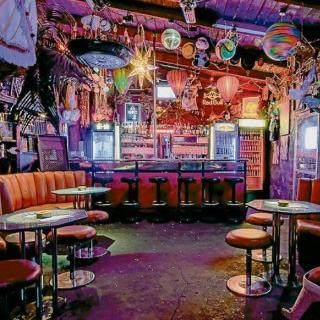 We were a group of 6 (5 girls and one guy) and we arrived at the club around midnight. By then, the queue was about 50 people deep but it only took about 30min or so to get to the front (Berlin being the club city of Europe, is notorious for its queues). There was a friendly vibe in the queue, with a mixture of tourists and locals. No one was particularly openly dressed in the theme, but everyone was sporting long summer coats and dresses (did I mention their strict dress code? No? Well, they have one) When we managed to get to the front of the queue, we were greeted by a security guard that looked straight from Hell’s Angels (aka, hot) He has quite the eye and could see who was there to have fun and who was not a regular fetish goer. He was cautious about one of the girl in our group (mind you, it was her first time and she was a bit nervous) but a quick flash of her attire underneath her dress, and voila, we were in.

What I would say now is that having a fix location for a fetish event makes a huge difference to the mood of the place. Events like TG or AC use regular venues, so there is only so much you can do to really bring the place to live. KitKat doesn’t have that problem at all. The walls were covered in erotica art with a slight Andy Warhol flair to it, whilst there were ornaments hanging from the ceilings everywhere you looked. Each part of the club had a different feel, but overall it was a well done effort.

As soon as you walk in and pay the £10 entrance, the cloakroom staff will hang you a hanger and bag to put your belongings for free. At this stage the lady will ask you to put your phone away in the bag in front of her. So yes, no phones allowed.

Once inside, the place is actually very cosy. From the cloackroom you can go to the main ‘chill area’ which consisted of a few sofas, a candy store and lots of places to sit and relax. From there you could go to the main dance floor (which was smaller than expected) or the swimming pool. Yes, you heard that right. They have a lovely 70s-feel swimming pool which sadly no one was using (I really wanted to jump in, but my more sensible friends decided that me and a pool was not a good idea). Play areas were plenty, from small corners by the DJ booth, to the entire basement. This place was definitely more play than dance, but even if you wanted to just dance, the music was amazing (who knew there was such a thing as ‘good’ techno?).

There were no actual shows or entertainments with the exception of some guys doing rope play by the main stage. I am guessing as this is a club which is open every night, they cannot have a TG-like show every single night.

Something I was surprised to see was how ‘vanilla’ people were. There was plenty of equipment and space to get up to no good but I didn’t see any rope play, or flogging or medical. People were just making out or having ‘standard’ sex. And even then, it wasn’t that much of it. It kind of reminded me a bit of TG in the sense that people were there to see and be seen, rather than play. I know the club stays open until late morning and I didn’t manage to stay there that late so maybe the best parts were yet to come but I was left a bit underwhelmed on that aspect.

Another thing to note is that Thursday to Sunday the venue operates as a couples or ladies’ groups only, so if you are a single girl looking for a single guy, it may get a bit tricky.

So, would I recommend it? I would so but only as a plan B kind of place. The music was good and the venue was great but it was certainly lacking ‘something’. I am not the biggest TG fan, but I would have rather gone to a TG event than to KitKat.