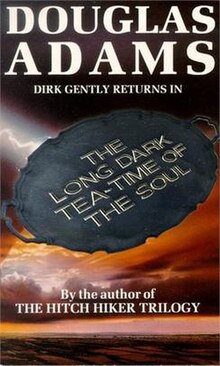 One of my favourite books of all time is The Hitchhikers Guide to the Galaxy Trilogy by the one and only Douglas Adams. They are truly well-written, with humour, satire, and carefully-thought analogies. These are books I am constantly recommending to people because they are not only smart, but they are the best escapism from everyday live.

With this in mind, it was only a matter of time before I ventured into his Detective Dirk Gently novels. Sadly there are only 3 in the series, with the first two being his most beloved ones. I started reading his first one but somehow misplaced given book, so I jumped into the second book without finishing the first one.

The book follows Detective Dirk as he tries to solve the mysterious murder of a music lawyer, an inexplicable explosion in Heathrow terminal 2 and the return of a rather confused god. A bit over the place? Yes, but that is Adams in a nutshell.

To read his books, you firstly need to forget everything you know about how books are written. There is no plot, or an actual story to follow, rather, there are small anecdotes filled with humour and small little truths in between. For example:

“Nobody got murdered before lunch. But nobody. People weren’t up to it. You needed a good lunch to get both the blood-sugar and blood-lust levels up.”
It is definitely bizarre, random but genuinely funny. My only criticism is that the pace can be off in some parts, and as usual with his books, after a great build up, the ending is always a bit of a let down.
Netflix has now turned this great series into a series, BUT DO NOT WATCH IT. It is horrendous and should be banned. #youhavebeenwarned
To conclude,would I recommend this book? Hell yes!